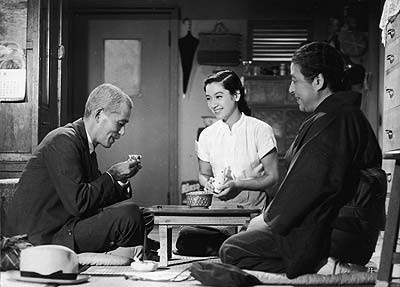 An elderly couple visit their grown children in Tokyo, but are not made to feel welcome, except by their widowed daughter-in-law.

I don't really know much about the director Yasujiro Ozu. I haven't seen any of his other movies. Jim Jarmusch has mentioned him as an influence, and you can see that in the use of a static camera. Unfortunately there was something wrong with the dvd, so I was unable to watch the last half hour of the film. Japan is a foreign country, and Japan in the 50s even more so, but the relationship between parents and grown children is pretty universal, I suppose, as is the theme of growing old. It's a film that it's easy to relate to. I found it maybe a bit black and white, with the bad daughter and the impossibly good daughter-in-law. Sometimes the characters say what they feel, when it would have been more exciting to guess their feelings.

Slow, foreign movies work maybe better in a cinema. Viewing it at home it's easy to be distracted by other things. The car chase was pretty good though.

Next: Carnival of Souls
Posted by Jason at 12:38 AM