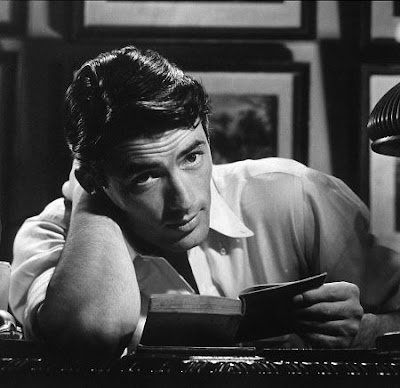 I just got a couple of Gregory Peck westerns and will also rewatch some of his other films. First: The Big Country by William Wyler. Peck is a former ship's captain going west to meet his future bride Caroll Baker, ending up in a conflict between two ranch owners.

So, Gregory Peck, was he sort of a Keanu Reeves of the 50s? They have some of the same qualities. The film also stars Jean Simmons, Charlton Heston and Burl Ives. Especially Ives is very good as one of the ranch owners. I love the scenes in old movies when somebody lights a match and the whole room lights up.

The Big Country is a big movie, almost three hours. It's good, but never really exciting. Or really funny for that matter.
Posted by Jason at 12:36 AM