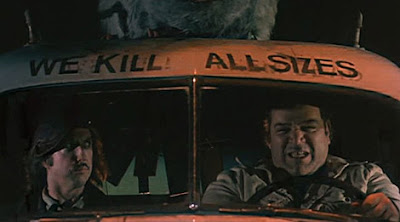 I was going to watch The Road, but you can tell from the first five minutes of the film that it's not going to work: Viggo Mortensen's dreary voiceover on top of the gray but perfectly composed images. There's a very powerful sequence in the book, where the father tells the son how to commit suicide with a gun. There's the same sequence in the film, but with images it actually loses a lot of it's power. So I turned off the film after 15 minutes. I liked the book a lot, but why would I be interested in sitting through this when I can choose not to? Sorry, Viggo!

So I rather popped in an antidote, Crimewave, the film directed by Sam Raimi and written by Joel and Ethan Coen between the two first Evil Dead films. It's about... well, it's not that important what's it about. It's sort of Harold Lloyd meets the Three Stooges. It has lots of great visual ideas, a cartoony energy with the camera forever spinning around, and everything is completely artificial. It is a movie like no other. It has Bruce Campbell in a supporting role as "a heel". It has been disowned by Raimi because he lost control of the film in editing. It is funny and probably a bit too much, but it only lasts 75 minutes, and they save the best joke for the end: the nuns and their oath of silence.

Next: The Misfits
Posted by Jason at 1:27 AM