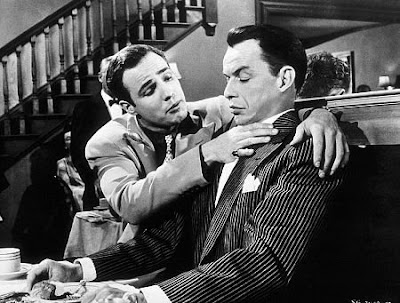 So, musicals... I don't know. Singin' in the rain is one of my favourite films, and I like most of the Fred Astaire and Ginger Rogers films. Those Astaire tapnumbers are always fun to watch. But most musicals I find a bit boring, and this film is no exception.

Frank Sinatra is Nathan Detroit, Marlon Brando is Sky Masterson. Sinatra makes a bet that Brando won't be able to seduce Salvation Army Officer Jean Simmons. If you've seen a couple of these movies you know how this will turn out. Of course, it's Brando who falls for Simmons, who is very appealing in her part, and the scene where she gets drunk is pretty funny. Vivian Blaine's Adelaide, Sinatra's girlfriend, is however pretty tiresome. You don't really care what happens to those two characters. Blaine also plays the part in a bigger, more theatrical style than the others.

There's a couple of good songs, but also some forgettable ones. Brando is no singer, but does all right. Sinatra really wanted to play Sky Masterson, and Luck be a Lady is the one song that he could have done better. At two and a half hours the film feels a bit too long.
Posted by Jason at 12:14 AM