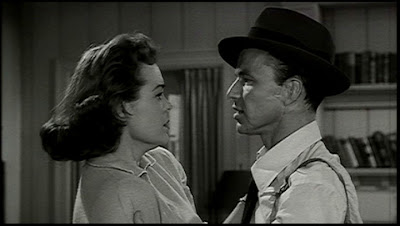 Moving on, I'll be watching a couple of Frank Sinatra films. First: Suddenly, or Je dois tuer (I must kill) as it's called in French. Suddenly is the name of a little town where one day it's announced that the president of the U.S.A. will be arriving on the afternoon train. Sinatra and two other men show up, claiming to be FBI agents, but their job is to kill the president. Sterling Hayden is the sheriff who must prevent it.

Frank Sinatra was someone you didn't mess with. He had a temper and got into fights for nothing. He is using that side of him in this film, doing a convincing portrayal of a coldblooded killer. It's a good, but not great film. It's clearly low budget. I'm not even sure if it can be called a film noir. Everything is very black and white, the bad guys and the good guys. There's none of the moral questioning that you find in the better films of the genre.

Next: The Manchurian Candidate
Posted by Jason at 12:10 AM