The Heart Is A Lonely Hunter 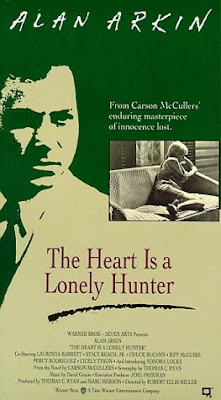 I got a bunch of dvds that don't really have anything in common except I bought them and haven't had the time to watch them yet. Starting with The Heart Is A Lonely Hunter. The story takes place in a little town in the South of the US. Alan Arkin is a deaf-mute renting a room in the house of teenage girl Sondra Locke. He's there to live close to another deaf-mute, and he also meets a black doctor and Stacy Keach as a bum, pretty much the same role Keach later played in Fat City.

I remember seeing this film on tv when I was a kid. We had a black and white tv at the time. I haven't seen the film since then and I was a bit disappointed in finding out that it actually is in colours. It's been many years since I read the novel by Carson McCullers, so I don't really know how well it has translated into film. It's got all the surface details at least. Especially Arkin and Locke are excellent, and I like the simplicity of the film. The director doesn't try to do anything fancy with the camera. It's a story about isolation and loneliness, about a girl becoming an adult, and the ending is just as touching as I remember it to be.