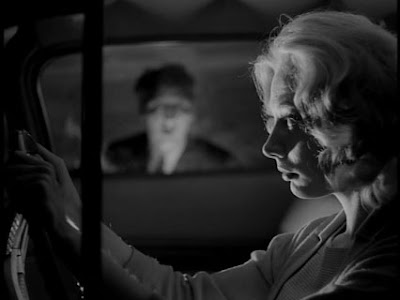 A woman is a passenger of a car that crashes through the railing of a bridge and into a river. She later appears on the riverbed, not knowing what happened or how she survived. She gets a job as a church organist in a small town, but keeps seeing a ghoulish character and having experiences where she is invisible to other people. She is also strangely drawn to an abandoned amusement park.

I caught this film on a French channel some years ago, not knowing anything about it, which is probably the best way to see a film like this. So if you've never seen this film, stop reading right now! Forget the title! Keep checking channels for late night movies and hope you stumble upon this one! See if it doesn't turn up in your dreams!

It's clearly low budget and has an amateurish feel, something that only increases it's strangeness. It's like a horrorfilm made by someone who has never seen a horrorfilm. There are clumsy scenes next to scenes that even Stanley Kubrick couldn't have done better. Candace Hilligoss as the main character gives a very effective performance, her spaced out eyes saying more than the often ridiculous dialogue.