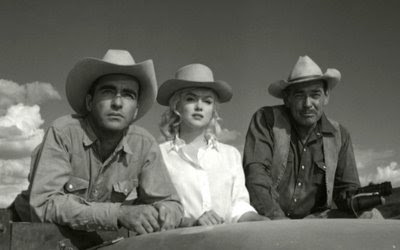 Marilyn Monroe is getting a divorce in Reno and falls for ageing cowboy Clark Gable.

Written by Arthur Miller, directed by John Huston and also starring Montgomery Clift, Eli Wallach and Thelma Ritter, this film should have been a classic, and it is, sort of; it was the last film of Monroe and Gable. But is it any good? I was a bit disappointed. I found it hard to believe in the characters and the story. As a portrayal of the end of an era, I think The Last Picture Show did a much better job. Gable and especially Clift are good in their parts. Marilyn Monroe I can believe in as a cartoony, blond bimbo, like in Some Like It Hot, but in this film where she is playing more of a real person, she is less convincing. The best part of the film are the scenes of capturing and tying down the horses. There's something very iconic about these scenes in black and white, and more or less symbolic, I suppose. Then it's sort of ruined by a tacked on happy ending.
Posted by Jason at 12:46 AM