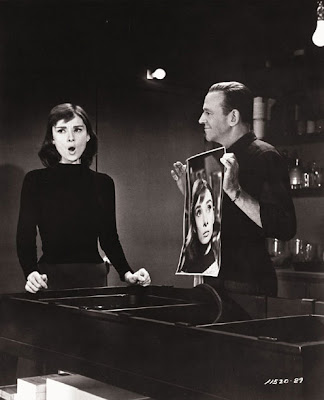 So, what was it about Audrey Hepburn and Paris? Did she have it written in her contract that all her movies should be shot there? Sabrina, Love in the Afternoon, Charade. I've never seen Paris When It Sizzles, that she made with William Holden, but I assume it was filmed in Paris. And then Funny Face.

Fred Astaire plays a fashion photographer looking for a fresh model, finding intellectual bookstore clerc Audrey Hepburn, his boss is offering her a contract and they all go to Paris. Complications ensue. There are some problems with the film. Hepburn as a wallflower is a bit hard to believe, and Astaire is really too old for her. He's also lost the sort of goofy charm he had in his early black and white films. Still could dance, though. Hepburn is very cute in her dance numbers. The film could have used some comic relief. Where's Eric Blore when you need him?

Next: Wait Until Dark
Posted by Jason at 4:33 AM