Two for the road 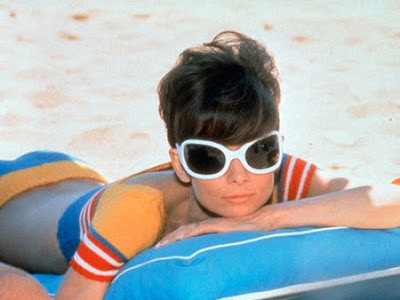 Before Inception there was... Two for the road! Taking place on five different time levels, jumping constantly back and forth, the film needs you to pay carefull attention, noticing Audrey Hepburn's hairstyle to realise where in the story you are. I should probably see it a second time.

The concept for the movie is quite original. We follow Hepburn and Albert Finney during ten years of travels through France, from the time they meet until they're an unhappily married couple, not told in chronological order, but rather by association, of sounds, dialogue, images.
Two For The Road goes for a nouvelle vague feel, but keeps at the same time one foot stuck in Hollywood, and for me the film falls a bit between two chairs. Some of the humour doesn't really fit, it doesn't seem as real as it should be next to the darker moments of the story. A more intimate portrayal would maybe have been better.

Audrey Hepburn and Albert Finney got great chemistry though. You can believe they're a married couple. Hepburn clearly enjoys taking a few steps away from her established screen persona.