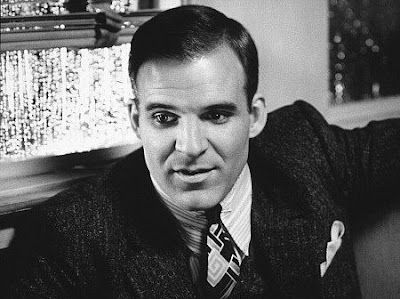 I feel a bit bad about having criticized Steve Martin, I mean, how much of an asshole does that make me?, so I decided to pop in one of my favourite films of his, Dead Men Don't Wear Plaid. Martin plays a detective investigating the death of Rachel Ward's dad. It also stars the director, Carl Reiner, and Reni Santoni, "Poppie" on Seinfeld.
The concept of the film is to use clips from old films from the 40s, so Steve Martin is interacting with people like Humphrey Bogart, Ava Gardner, Burt Lancaster and Ingrid Bergman, from movies like The Killers, Notorious, Sorry Wrong Number and The Lost Weekend. It's cleverly done, with Reiner mimicing the style of those movies and including the rear window projections and the spinning newspapers.
The scene of Steve Martin making "a cup of my java" is a classic, and there are some especially funny scenes where he is putting on women's clothing and a wig, replacing Barbara Stanwyck in Double Indemnity and kissing Fred MacMurray. He's also dressing up as James Cagney's mother in White Heat. It's possible that the film loses a bit of steam in the last part, but it's still very good.
Posted by Jason at 9:48 AM