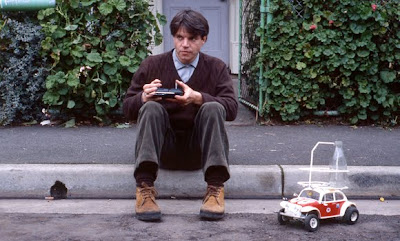 Colin Friels is Malcolm, a shy loner who is fired from his tramways job. To make money he rents out a room in his house to ex-convict Frank and his girlfriend. Using Malcolm's talent for inventions they pull a heist.

This Australian comedy reminds me a bit of another 80s film, Local Hero. The story is different, but it has some of the same gentle tone. It has a catchy score by Penguin Café Orchestra. The most famous image of the film is the car that splits in two while driving. Malcolm and Frank decide to split it a second time, inviting along Frank's girlfriend. There's one of those magical moments on film when you know some people will pull a prank on someone. You as a viewer know something that person doesn't know. You're in on the prank. The way I remembered it they milked this for a long time, but it actually only lasts a couple of seconds.

How 80s is it? 2/10. It feels more 70s. Where's the INXS endtitles track? It's the women's clothing and hairstyles that give it away.

Next: Le dernier combat
Posted by Jason at 12:25 AM