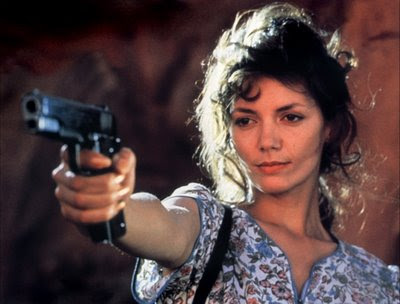 Joanne Whalley-Kilmer is the femme fatale who asks private detective Val Kilmer to fake her death, to avoid being found by her boyfriend Michael Madsen from whom she stole a suitcase of money.

This is my favourite of the John Dahl neo noirs. The film holds up quite well, I think. I had forgotten some of the twists in the story. Kilmer is maybe a bit too young and babyfaced for the part of the detective. Madsen looks like a grumpy, squinting Elvis. The interiors are shot in a self-consciously noir style, with shadows of venetian blinds on the walls, but that's part of the fun of the genre, so why avoid it?

It's interesting though, how fast the iconography of film noir turned into clichés, used over the years in commercials and parodies, becoming finally the accepted picture of how noir should look. In an early noir like The Maltese Falcon, made in 1941, Mary Astor in the role of the femme fatale seems today just wrong. She doesn't have the Veronica Lake or Lauren Bacall hairstyle a femme fatale is supposed to have.