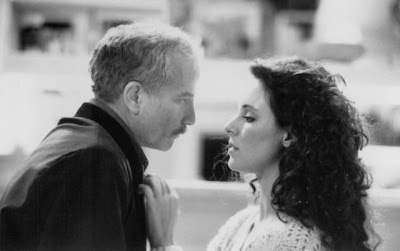 I made a double feature out of it. In F/X Bryan Brown is a special effects guy asked by the justice department to fake the death of mob guy Jerry Orbach. It goes wrong and Brown is the innocent man on the run, using all the knowledge from his job to survive. Brian Dennehy is a cop, trying to find out what the hell is going on.

In Stakeout Richard Dreyfuss and Emilio Estevez are cops doing surveillance on Madeleine Stowe, ex-girlfriend of escaped convict Aidan Quinn. Then Dreyfuss falls in love with Stowe. Who wouldn't? The script is by Jim Kouf who also wrote The Hidden. The film also stars a young Forest Whitaker.

Well, it's a popcorn film, a mix of everything. Carchase, buddy movie, romance, a comedy version of Rear window. It's good, but the ending is a bit dragged out. There's also a quick scene of Madeleine Stowe naked for those who care about such things. I don't!