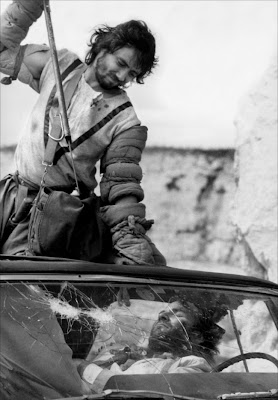 Luc Besson's debut film is sort of a French Mad Max. Max le Fou? Mad Jean-Paul? It's after the catastrophe, in the ruins of civilisation. Some incident has made people unable to speak. The whole film is told in black and white images.

A young man meets an old man, and they form a father and son relationship. There's a woman, locked up in a cell, and... in this broken world Jean Reno is the violent madman who must break the few things that are not broken. The film is like a dark fable. I think Beckett would have liked it.

Among the actors is also Fritz Wepper. For Americans this name won't mean a thing. But I suppose every European my age must have seen at least one episode of the German television show Derrick where he played Harry Klein.

How 80s is it? 3 out of 10. It takes place in the future, but it gets 3 points just for the annoying score. Early Besson movies like Subway and The Big Blue are almost unwatchable today because of the awful music of Eric Serra.