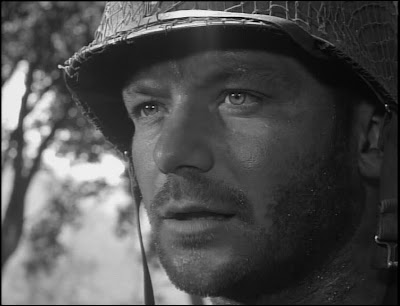 I've been watching two movies by Anthony Mann, Men in War and God's Little Acre, both starring Robert Ryan and Aldo Ray. Mann had a pretty long career, but is maybe best known for his westerns with James Stewart. Ryan did lots of great film noirs, like Crossfire, Odds Against Tomorrow, The Set-Up and was also in The Wild Bunch. I haven't seen anything with Aldo Ray before, only knowing he was an inspiration for the name of Brad Pitt's character in Inglourious Basterds, Aldo Raine.
Men in War takes place in Korea, 1950. We follow lieutenant Robert Ryan and a group of soldiers on their way to take control of some hill. They run into sergeant Aldo Ray, driving a jeep with a shellshocked colonel, all of them sharing the road towards the hill, surrounded by enemies. The film holds up well. It's quite somber and realistic. The story is told more in closeups of the soldiers tired faces than in explosions and action sequences, even though there is a bit of that at the end.
God's Little Acre is something completely different, a sort of Li'l Abner-ish story of a man, Robert Ryan, digging holes all over his farm, looking for gold that his grandfather buried there. The film also stars Buddy Hackett, Michael Landon, as an albino!, and Tina Louise, the definition of Va-va Woom. Unfortunately, the story is less interesting, a mix of melodrama and broad humour.
Posted by Jason at 6:32 AM