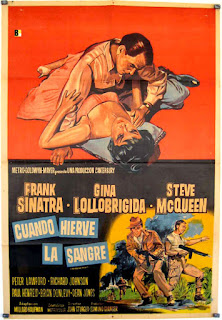 Sinatra could be a good actor when he made the effort. This is not one of those films. There's not much chemistry between him and Lollobrigida, and the silly dialogues they're given doesn't help. The jungle battle scenes don't look too convincing either. The film gets more interesting during the last half hour, but then it's hard to care.
Posted by Jason at 12:27 AM