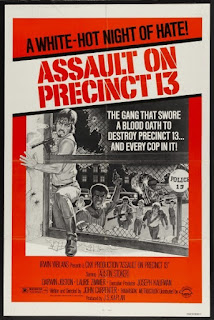 John Carpenter's variation on Rio Bravo. This is a pretty good movie. You can see the signs of a low budget - there's an awkwardness in some of the acting - but that also gives the film a certain freshness. Apparently it was shot in twenty days. There's an economical storytelling and leanness in the script that Carpenter got from directors like Howard Hawks.

I made the mistake of also watching the remake, starring Ethan Hawke, Laurence Fishburne and Gabriel Byrne. The fact that they made a remake is hard to criticize, since Carpenter's The Thing is also a remake, but dammit, it's still a crappy film. The 2005 version has more action, more twists and turns, more dialogue - the script must be twice as long as the original - so why is it more boring? The characters are all pretty annoying for one thing, and visually the film is ugly, with a constant blue night tone and overuse of handheld camera. Worst of all, the film is no fun! You can say what you want about the killing of the little girl in the original, but it's an image that sticks in your mind. The remake has nothing like that, it's more depressing in its cliché-ridden mediocrity.
Posted by Jason at 1:49 AM