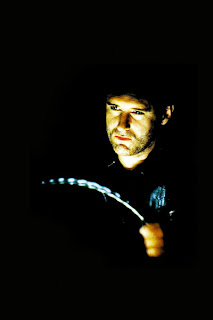 Bill Pullman is sent to jail for killing Patricia Arquette and then turns into Balthazar Getty, directed by David Lynch.

This is some spooky shit we got here. The first 45 minutes of the film are great - pure Lynch, with a creepy, dreamlike quality. Then it seems like co-author Barry Gifford takes over and turns it into a clunky film noir fantasy, with Arquette as a femme fatale and a porn film subplot. But the dream logic is gone, and none of the different pieces really fit together. Getty is a less talented Charlie Sheen, putting Marilyn Manson in the film dates it pretty badly - maybe not as much as putting Frankie Goes to Hollywood in Body Double, but still - and worst of all, Lynch himself seems to go missing, only turning up occasionally, like in the coffee table scene. Some ideas in the film reappear in Mulholland Drive, with a much better result.
Posted by Jason at 1:29 AM