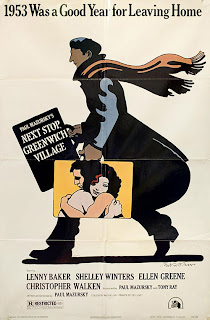 1953: Lenny Baker is an aspiring actor from Brooklyn, moving to Greenwich Village. Also starring Shelley Winters, Christopher Walken, in a small part Jeff Goldblum, and in a blink and you'll miss him part Bill Murray, directed by Paul Mazursky.

Maybe not quite a masterpiece, but it's a great, affecting film. Baker looked like a mix between James Woods and Jean-Paul Belmondo, Winters plays the ultimate Jewish mother. The story takes place in the jazz / beatnik era, before the folkmusic boom. I like that it's a slow film, with really long scenes, and Mazursky is very generous to the characters, even the cheating girlfriend. I remember seeing this film on tv as a kid, and thinking that this is what adult life will be like.
Posted by Jason at 2:18 AM