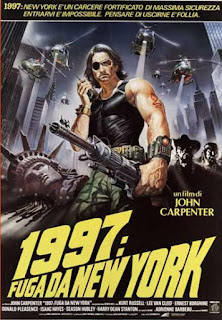 New York:
What is it that really ages a film? Computer graphics! And the twin towers, I suppose... It's a fun but not perfect film. Plot-wise they jump a few points. The cabbie just turns up at the end, when they need him, with the tape? And the whole tape bit is kind of silly. Ernest Borgnine is fun, though, in his part.

LA:
Ah, what happened? Carpenter and Russell can only blame themselves for this film. I don't think producers put a gun to their heads and said, make it an exact copy of the first film, just worse in every way. In the original they had a burned down city to film in, here there are obvious sets - and overlit. What ages a film? Bad mid 90s CGI, that's what. Maybe, if you're ten years old, the hangglider attack at the end is cool - for anybody else, it's hard not to make fun of. Tarantino wants to retire after his tenth film, saying directing is a young man's game. He might have a point.
Posted by Jason at 1:06 AM