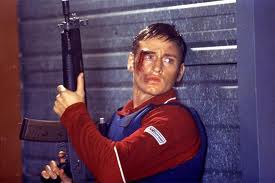 A French variation on Assault on Precinct 13, by Florent-Emilio Siri, who also did Hostage, the Bruce Willis film.

Now this is more like it! It's a far better film than the Assault remake. The story is mostly told visually, with not that much dialogue. Holding off the exposition, it takes about half an hour before you know who the different people are. Then, in the last half hour, all hell breaks loose. And the film even got some style to spare.
Posted by Jason at 12:29 AM