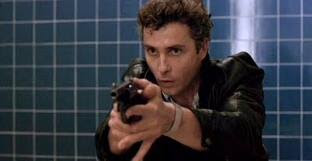 It starts out as a pretty simple Cops and Robbers film, or Cops and Counterfeiters, actually, but then becomes something more interesting, more of an existential does the end justify the means? sort of thing. The film has a dated 80s aesthetic to it, and it doesn't help that the score is by synth popgroup Wang Chung, but besides that it holds up quite well. If you wanted a bad guy in the 80s you could do worse than hire Willem Dafoe, there's a great car chase, and the film should take it's place somewhere between Point Blank and Heat on the list of the best portrayals of Los Angeles.
Posted by Jason at 12:36 AM