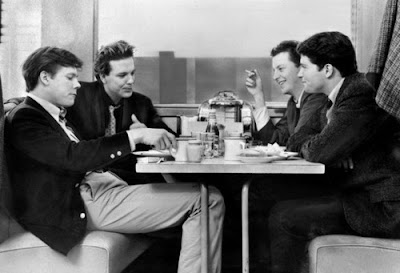 Baltimore, 1959. A group of guys get together at a diner, talking about life and girls and stuff. Starring a lot of actors who then went on to become famous, written and directed by Barry Levinson.

Okay, so it's mostly about guys talking, Seinfeld The Movie, sort of, but that's fine, Levinson is very good with the way people speak. The film is capturing a time and a place without getting too nostalgic. It's a bit strange to see these actors back when they were young and goodlooking - Mickey Rourke had moviestar written all over him - so it's almost impossible to watch the film without thinking about the progress of time and aging.