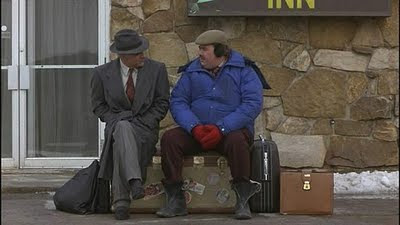 Steve Martin is trying to get home to his family for thanksgiving. Unfortunately, he has to travel with fat slob John Candy. Written and directed by John Hughes.

Those aren't pillows! It's a pretty safe, non-edgy comedy extolling middle class values like marriage and apple pie, it's practically a feelgood movie for chrissake that you could see with your grandmother, is there even the utterance of a "fuck" in the film?, oh yeah, there's the great car rental scene with Steve Martin, okay, but really, it's the kind of mainstream Hollywood film that you would feel slightly embarrassed to be seen walking out of at age 17 when you saw yourself as a rebel, but less so at the age where you'd rather see a oh, I don't know, Billy Joel concert than one with Marilyn Manson or whoever is the equivalent of Marilyn Manson these days.