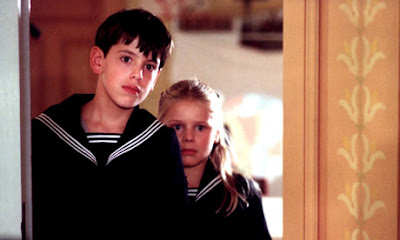 It's a bit hard to get much of a christmas feeling in the south of France, so what better than to re-watch Ingemar Bergman's Fanny and Alexander, his part Scandinavian melancholia, part magic realism tale of a family in the early part of the previous century and a summing up of the director's oeuvre (Look, Ma, I used the word oeuvre!).

There are some funny differences between Norwegians and Swedes. Swedes like to sing drinking songs, something that Norwegians never do. And they often refer to each other in the third person when talking. Each time I watch this film I tell myself I should check out more of Bergman's earlier black and white films, but they have a reputation of being dark and depressing, so I never do. And where do I start? The Seventh Seal? Everything comes together for this film: The composition of the images, Sven Nykvist's cinematography, all the actors, even the two kids! and the script. A masterpiece, and the extended tv version is even better. Favourite parts: the escape, the puppet, the mummy, the scene with Ismael and Gustav's speach.
Posted by Jason at 12:36 AM