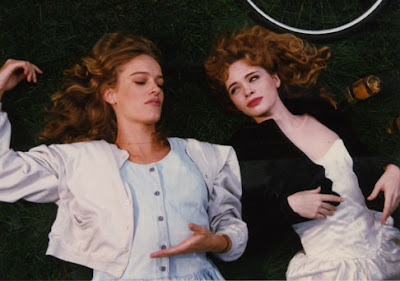 Adrienne Shelly is a depressed teenager waiting for the end of the world, Robert Burke is a mechanic with a history. Also starring Edie Falco from before The Sopranos, written and directed by Hal Hartley.

Hartley's debut film has the Hartley touch right from the beginning. No establishing shots and quirky dialogues. A small universe where the same people keep bumping into each other. Can you have faith in other people? People are only as good as the deals they make and keep. Hartley namedrops some of his heroes here: Molière and Victor Hugo. I believe the words ozone layer is mentioned in all of Hartley's three first films. It's the ozone layer triology? Why did Adrienne Shelly die so young and Paris Hilton is still alive, that's what I want to know. Hartley is an unfortunate name, because you can't say that Robert Burke is playing the typical Hartleyian hero. Or can you?

The quality of my dvd is pretty bad. The image is too bright. Strangely, some sequences from the film is repeated in the bonus Hartley interview, and there they look much better. Bit of a bummer.
Posted by Jason at 1:00 AM