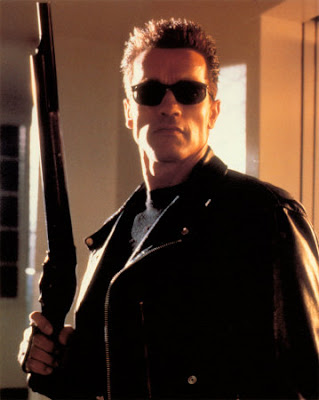 I was going to watch Seven Samurai, but what's with the yelling of all the lines of dialogue? I know it's a classic and everything, but do I need three hours of this? So I stoppet it after ten minutes and rather put on... Terminator 2! Arnold Schwarzenegger is the bad ter... no, wait, he's the good terminator. Directed by James Cameron.

The film came out in 91. It's 20 years old! I've reached the age where it's almost a bit depressing to watch films like this. Where did all the years go? Sigh... Well, anyway... Terminator 1 is a better, leaner film, I think. T2 has some fat in the middle. The part where they go to kill the computer guy drags a bit. Linda Hamilton's voiceover they could have skipped and Edward Furlong is a bit annoying. The CGI stuff is still pretty impressive, but it's also the beginning of the end in a way. It's all going downhill from here on, ending up in wall to wall CGI fests like Van Helsing. The pepsi product placement also ruins it a bit, always showing up in the best scenes, dammit! Cameron knows action, of course, but he's also good with the small details. Love the scene of the T 1000 waving his finger in a no, no sign.
Posted by Jason at 3:32 AM