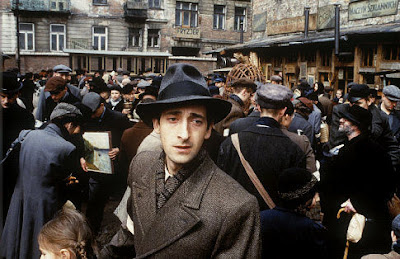 Adrien Brody is Wladyslaw Szpilman, a Jewish musician trying to survive in Warsaw during World War 2. Directed by Roman Polanski.

It's a tremendously powerful film. It's less sentimental than Schindler's List. I don't think there are any scenes in this film that could have been parodized on Seinfeld. Each time I watch films like this or documentaries about the holocaust, it's hard to wrap your mind around the fact that this happened less than seventy years ago. It's impossible to imagine what Szpilman goes through. I normally like black and white films, but I think colour works best in this story. You are used to images in black and white from WW2, and this film being in colour brings the story closer. The film makes you lose faith in humanity, but at the same time, through Szpilman's survival, makes you believe in the human spirit.
Posted by Jason at 3:29 AM