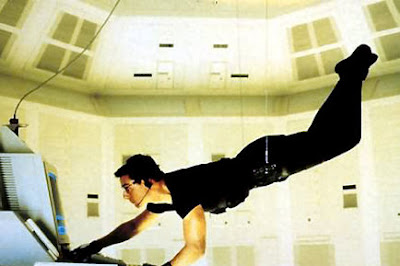 Tom Cruise is a secret agent, some people die and things blow up. Directed by Brian De Palma.

There's a new Mission Impossible film on the way. I'll probably go see it. I enjoyed the third one, even if Abrams obviously comes from tv and is used to commercial breaks every ten minutes. There was a lot of action, but not really much tension. For an example of tension, see the CIA sequence in this film. Possibly, kids today will find it slow and boring, but anyway. The second film... Actually, let's not talk about the second film. Let's pretend it never happened. The first film is clearly a "one for them" film for De Palma, it's less personal, but it's a beautiful piece of craftsmanship. The opening scene, though, with the tv image showing something that is a setup is very much De Palma. Apparently Cruise and the producer didn't allow De Palma to do any split screens. Oh, well... Tom Cruise is kind of a selfconfident prick in his role, but he's a moviestar, I'll admit. The helicopter in the tunnel sequence at the end is pretty ridiculous, but when the theme tune kicks in it's hard not to sit there watching with a big grin on your face.
Posted by Jason at 10:31 AM