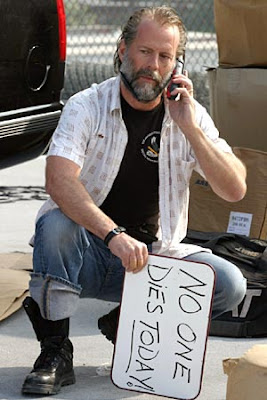 Bruce Willis is a former police negotiator who gets the chance to redeem himself. Also starring Kevin Pollak and Ben Foster, directed by Florent Emilio Siri.

On the list of underestimated Bruce Willis films - it's a pretty short list - I think this one should be somewhere close to the top. There's something strange about this film, and it took me a while to realize what it was: It's a modern action film / police drama, but the camera isn't constantly spinning around for no reason. Sometimes it doesn't move at all! It's directed in a rather classic style by Siri, who also did the terrific French film Nid de Guêpes. It's the visual style that makes it worth watching, rather than the story that's not that much to brag about - they could have worked a bit more on the script. Bruce Willis is solid in his part and Ben Foster makes a convincing psycho. I'm sure he could spend the rest of his career doing those parts if he wants to. There is some violence towards small kids in the film that is a bit unpleasant. Also a pretty neat Sin City-ish title sequence.
Posted by Jason at 1:30 AM