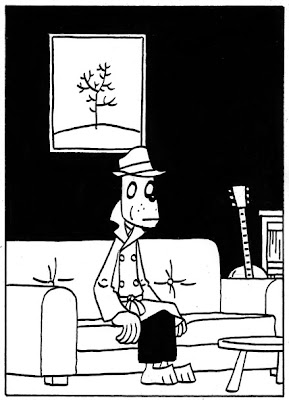 I now got 100 pages begun - they're in various states of being lettered, pencilled, half finished and finished. That leaves around 45-50 pages left. I hope to have the thing finished in May for publication in French next fall and in English in spring, 13.

I like the books of Raymond Chandler and have been wanting to do something within the detective genre. Originally I had thought about doing a story in the US in the fourties, but found it might be better to have some distance, so it's rather set today in France. Also, it's more of a playful take on the genre, it's not completely straight, so maybe something a bit closer to Truffaut's Stolen Kisses. That's what I hope, anyway. We'll see how that turns out when the book is done. And the title? The title is two words, the first word is: Lost
Posted by Jason at 10:15 AM