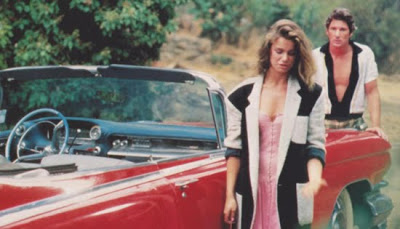 Richard Gere is a car thief who kills a policeman. He tries to escape to Mexico with his French girlfriend, Valerie Kaprisky. A remake of Godard's A Bout De Souffle, directed by Jim McBride.

This isn't really a good film. For one thing, was Kaprisky really the best French actress willing to take her shirt off they could find? Ok, she's pretty, but she can't act. She's no Jean Seberg! And Gere is as usual a bit too full of himself. But it's interesting to see how this film influenced Quentin Tarantino. There's the surf music, the clearly fake back projections, there's the scene of Gere reading for Kaprisky from The Silver Surfer, that Tarantino ripped off in True Romance. And would Bruce Willis have had a French girlfriend in Pulp Fiction if it hadn't been for this film?
The final scene of the film, though, I must admit makes the film worth sitting through. And, funnily enough, they quote "Between grief and nothing I choose grief", that was also quoted in Ferris Bueller's Day Off.
Posted by Jason at 5:52 AM