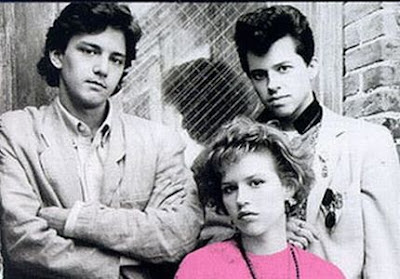 A Study of The Class Struggle And Difference in Values Between The Proletariat And The Bourgeoisie Seen in The American Highschool. Actually, that was the title of the film, until they changed it for commercial reasons. Starring Jon Cryer, Molly Ringwald, Andrew McCarthy and James Spader, written by John Hughes, directed by Howard Deutch.

Yeah, I'm re-watching Pretty in Pink now, what's wrong with me? It's pathetic, I know. Anyway, of all the Hughes teen movies, I think this is my favourite. Breakfast Club seemed to try to say something important, but I'm not quite sure how much it succeded. Pretty in Pink was basically just a love story, and it's hard now not to notice how innocent the film is, clearly made before irony was invented! Also, in Ferris Bueller's Day Off and Breakfast Club all the adults are stupid - in this film Ringwald's dad is actually a sympathetic character. It helps that he's played by Harry Dean Stanton. I had one problem with the film. I don't really buy Spader falling for Ringwald. He's obviously more of a blonde with big tits kind of guy. And Ringwald's whacky girlfriend is sort of a big cliché. Okay, two problems.

It's strange, nostalgia for the eighties, a time when The Cold War between The U.S. and The Soviet Union was going on for full, and you expected the whole damn planet to blow up any minute, but what do you remember best from this period? Mullets, skinny ties and that song by Simple Minds.