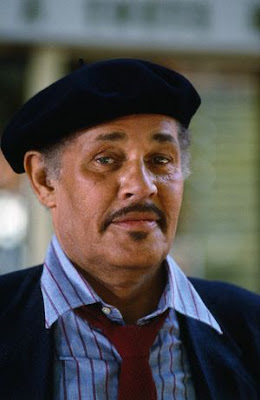 Paris, 1959. Dexter Gordon is an alcoholic saxophonist playing at The Blue Note. He forms a friendship with a young Frenchman, François Cluzet. Also starring Martin Scorsese, directed by Bertrand Tavernier.

I like this film. It made me discover jazz music the same way Amadeus made me discover classical music. Gordon really shines in his part. Everything he says becomes poetry. The director is French, so there is no Eiffel tower in the background every 10 minutes to remind us we're in Paris. There's also a slowness I think you'd only find in a European film. It reminded me a bit of watching Crazy Heart, the Jeff Bridges film, that has sort of a similar story, but I thought that film had clichés that you don't find in this one. And for that film, being such an American story, it could possibly have been improved with a European director, seeing it with fresh eyes. Atlantic City and Paris, Texas are two examples. Anyway, great film and great music.
Posted by Jason at 3:04 AM