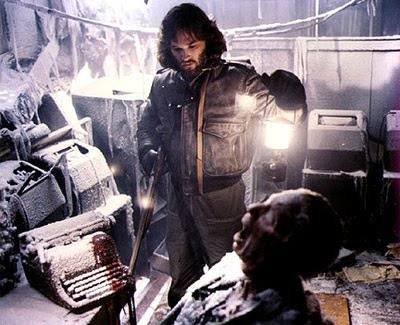 Antarctica. An American research station is taken over by a shapechanging alien. Starring Kurt Russell and some other guys, directed by John Carpenter.

Seeing the trailer for the prequel made me want to re-watch the original. Or the remake, I should say, not the Howard Hawks film. It holds up pretty well, I think. The computers in the film date it more than the creature effects. The walking head sequence is still great, the image I remember best from seeing it in the cinema. The dog in the film should have gotten an Oscar! Russell is pretty good as well. One thing about being Norwegian is that you understand what the crazy Norwegian guy shooting at the dog says, so you know from the opening what is going on, giving the film even more of a gloomy, hopeless feel.
Posted by Jason at 9:13 AM