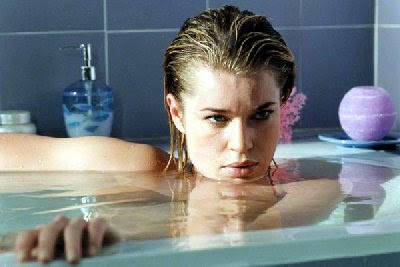 Okay, this is not one of De Palma's very best films, but it's the one where I felt I finally understood De Palma, it's the one that made me a fan. Previously I had mostly liked his more commercial films, like The Untouchables and Mission Impossible. This film has some ridiculous dialogue, big coincidences and logically the heist makes no sense at all. The whole heist is based on Romijn-Stamos being able to seduce the girl with the diamonds. But VISUALLY it makes sense! The heist sequence with the Bolero influenced music is hypnotic, it's pure film and pure De Palma. I love the part with the cat! I'd say the best sequences in the film are those with no dialogue. As soon as one of the characters open his mouth you sort of want to push fast forward.

Another great sequence is the one with the wedding photographer waiting for the sun to re-appear and the gangsters wearing suits trying to catch the diamond girl wearing boots and some sort of army look hotpants, only showing their legs running, in slow motion. Apparently the film was made with European money. After the heist, there is a long sequence where you at first have no idea what's going on, with Romijn-Stamos turning out to be the double of a French girl. 15 minutes pass before you start figuring it out. I'm not sure an American studio would have allowed such a long sequence like that where you could end up losing the audience. There's also, not to give too much away, a big part of the film that might be seen as a cheat, but that I found to be completely fitting for the noir universe of the film.

Anyway, this film made me go find his older films, and even the lesser ones, like Raising Cain and Snake Eyes will have one or two of those brilliant sequences or set pieces that make them worth seeing, showing De Palma to be the master of visual storytelling.
Posted by Jason at 12:35 AM