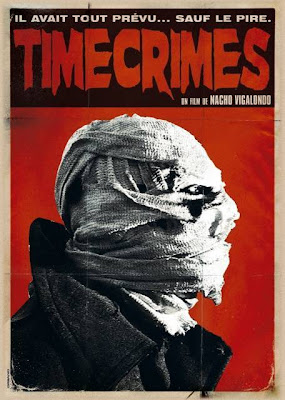 Apparently some good films have been made the last ten years. Like Timecrimes, a Spanish film where a man in the countryside sees a naked woman in the woods through his binoculars. He goes to investigate and is attacked by a man whose face is covered by bandages. Then he travels back in time. Directed by Nacho Vigalondo.

Timetravel films are fun, no? They're hard to screw up. This one starts out creepy, then gets strange, then stranger and then funny. How far can you go with the paradoxes that always appear in these films? Well, in this film pretty far, with the main character in usual fashion going back in time to correct what he did wrong the first time he went back in time. It's very inventive, even though I seem to remember a short story by Isaac Azimov that had some of the same premises, and I can only assume an American remake is in the works where they have some hunk instead of a bald, fat middleaged guy in the main role and lose all the charm of the original.
Posted by Jason at 1:10 AM