Empire of The Sun 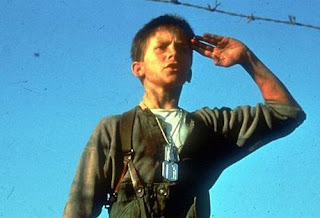 An English boy is separated from his parents during the Japanese invasion of Shanghai. Starring Christian Bale and John Malkovich, directed by Steven Spielberg.

The film is Spielberg doing his best David Lean. The direction is mostly restrained, except for when it's not: the moments where "magical" is pushed up to 11. It's not a bad film, but there are many scenes that just don't ring true. At that point in his life Spielberg seemed to be unable to face the realities of war, so the film is pretty much about a boy who thinks that planes are really neat, and Malkovich stealing the shoes of a dead woman is about as dark as it gets. He did a better job with Saving Private Ryan and Schindler's List, without ever really losing that sentimental touch. I guess it wouldn't be a Spielberg film without it. Christian Bale is convincing in his part, though.
Posted by Jason at 3:05 AM