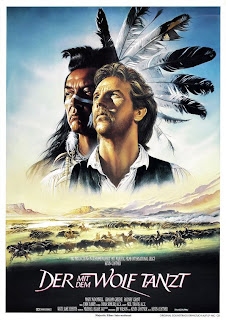 I saw Dances With Wolves when it came out, and remember being disappointed by the film. But I think maybe I focused a bit too much on the bits and pieces I didn't like. Watching the special edition, almost four hours long, it's actually quite good. It's still a bit too cute - Costner falling on his ass, and so on. His character feels too modern and touchy feely for a soldier who's seen war. The film is a continuation of the revisionist Westerns of the 70s, like Little Big Man, and is like that film maybe too black and white - the Indians are all noble and wise, the whites are crazy or ignorant swines. But there are some nice images or sequences, like the buffalo hunt, and it has some humour. I was quite moved by the ending. There are also some places you can see that it's a debut film for Costner as director - images he fell in love with, but that don't bring the story forward. A bit tighter editing might have helped.
And really, the title is misleading! There's only one wolf! I expected at least two! Shouldn't it be Dances With Wolf In Distance or Dances While Wolf Is Watching, Not Sure What Is Going On? Well, possibly Indian names didn't have commas.
Posted by Jason at 1:33 AM