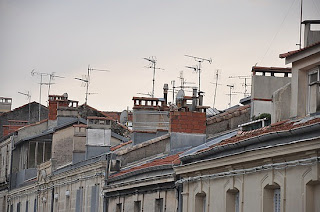 Saw a small lizard on my window ledge last night. It was around 5 cms, probably a common wall lizard. I've  seen lots of them before, usually bigger and usually out in nature, often in parks, not some lizard I could invite into my apartment for a beer.

There's a white cat, or two actually, I think, often walking across the roofs on the other side of the street where I live. It sometimes jumps onto some other roofs, something that always makes me a bit nervous. I don't want to be witness to it falling. Be careful, okay, cat?

The mystery of the pigeon babies. Where are they? Well, I saw one on the sidewalk today, looking a bit shabby. Probably fell out of the nest. Hope it will be able to fly soon, or it will be killed by some of the cats around here. Maybe even the white one, who just landed in a parachute, who knows.

And... washed my clothes at local laundromat / laverie, something that usually is a chore. But the 20 minutes it took for my clothes to dry in the spinner, I sat in a chair outside the entrance, pretending to read my paperback, but in reality looking at the women walking by and enjoying that it's summer.
Posted by Jason at 3:49 AM