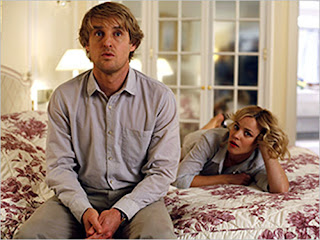 I was planning to see Calamari Union by Kaurismäki, only to discover that the dvd I bought in Oslo was empty. The same with Crime and Punishment. No discs! Damn you, Platekompaniet! So yes, that was a bit annoying... Oh well. I rather put on Midnight in Paris.

People have told me it reminded them of my comic book, The Left Bank Gang, so I was curious to see it. There's even a scene of Zelda Fitzgerald talking about being bored. I should sue Woody Allen! I actually enjoyed the film, after giving up on Allen around Shadows and Fog, and disliking the couple of his films I've seen after that. Typically, he shows the romantic side of Paris, as he also did in Everyone Says I love You. There are no people crowded together on the Paris metro in a Woody Allen film. Woody Allen has probably never taken the metro in Paris in his life, he can afford cabs. It sometimes rains, that's as far as he goes. Raining in a romantic way, of course. I found it a bit unfortunate that he, in a conversation in the film, too obviously states the message of the story: the inherent lies of nostalgia. Thank you, Mr Allen, I think I got that on my own. And the quarrel between Owen Wilson and his girlfriend where they walk in and out of the shot is a scene we've already seen in a million Woody Allen films. Okay, maybe not a million. But it's a funny, appealing film, looking almost a bit too pretty.
Posted by Jason at 12:13 AM