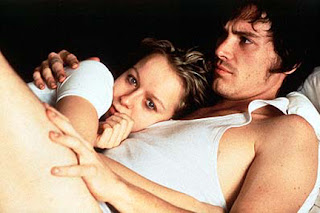 I was curious about this film, based on Denis Johnson's short story collection. It follows some people in the 70s. Some drugs are involved. Starring, among others, Billy Crudup, Samantha Morton, Denis Leary and Jack Black, directed by Alison Mclean.

To base a film on shortstories is not the easiest thing to do. The whole point of the short story will often be hidden between the lines - it will come together in the reader's mind - and often be lost when told in images. Unfortunately, the director doesn't have much of a vision; the film has an annoyingly anonymous indie feel, as if made with some Sundance computer program. It lacks the precision of the short stories. Clinging to the text in a voiceover doesn't help. It should have been sadder, it should have been funnier. It should have been better, actually.
Posted by Jason at 4:24 AM