...and dvds bought in Montpellier 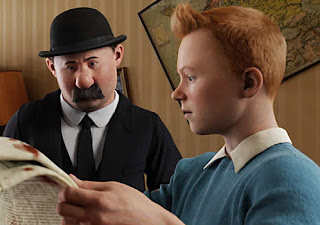 It was one of those 5 dvds for 30 euros deals at Virgin Megastore. Together with the ones I got in Paris and Oslo it really should be enough dvds for a while. First up: Tintin!

I think I had an open mind about seeing this film. I knew it would be different from the comics. Film's a different medium. It would be Spielberg's Tintin, not Hergé's Tintin. Spielberg has done some good films, right? But, no, I didn't like it at all. I almost turned it off after the first half hour. Okay, it's visually inventive, but it's just too noisy, with constant movements - a film for the videogame generation, and closer to Pirates of The Caribbean than the spirit of Tintin. I longed for a quiet moment with not much happening. Even Raiders of The Lost Ark had some of those. The silent film slapstick + Hitchcock suspense that you find in the Tintin albums is completely gone, it's all just a rush for the next action scene. And they screwed up the funniest scene from the album, at the pickpocket's apartment where Dupont and Dupond find all their wallets!