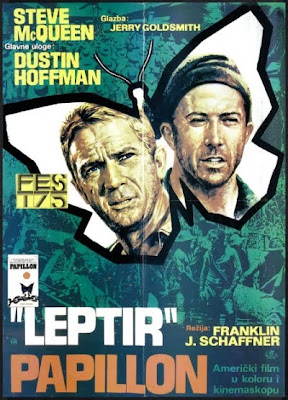 Steve McQueen and Dustin Hoffman are prisoners in a French penal colony. Apparently based on a true story, directed by Franklin J. Schaffner.

Great film. I don't really have much to say about it. McQueen gives a bravura performance. It helps that he has some lines on his face and looks as if he's actually lived a life. He didn't graduate from the Hollywood Prettyboy Acting School (HPAS for short). Hoffman looks slightly Jean Reno-ish. A minor negative thing is that the actors don't age during the film, so you don't really get an impression of how long they stay on the island. There's something about the films from the seventies that make them perfect for watching on lazy Sundays. The Roger Moore Bond films, the Agatha Christie and the Irwin Allen Disaster movies with a million old stars in them, included.
Posted by Jason at 2:25 AM