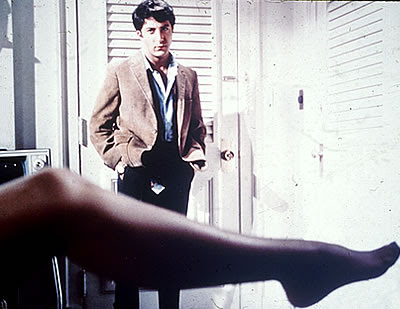 Rewatched The Graduate and watched Carnal Knowledge for the first time, both directed by Mike Nichols. I hadn't seen The Graduate in a while. For some reason I'd gotten it into my head that the film was overrated. It's not! One word: Classic. Not sure where that idea came from. The direction by Nichols is a bit showy, maybe that was the thing that bothered me. But no, it fits the story perfectly, the music by Simon & Garfunkel is great and you can't beat that ending.

Carnal Knowledge is great as well. It has a good script by Jules Feiffer. There are long takes with the camera just observing what is happening. It actually looks very modern, like some indie film made last year. Candice Bergen is very appealing, but she disappears after the first third of the film. And Jack Nicholson is very interesting to see in these early films before he became JACK NICHOLSON. There's a scene where he quarrels with Ann-Margret that is sort of pointing towards the rest of his career.
Posted by Jason at 9:14 AM