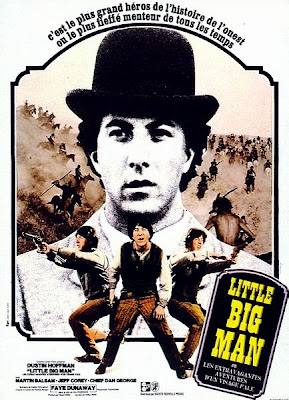 Dustin Hoffman is a 120 years old man telling a tall tale of how he was adopted by Indians and fought general Custer. Also starring Faye Dunaway, directed by Arthur Penn.

Another film I remember seeing on tv as a kid. It's a revisionist western that feels slightly dated. In the film all the Indians are noble and all the whites are assholes. As a contrast to the way Indians were depicted in westerns from the fifties, okay, it's earned, but surely, there must have been some Indian assholes as well, no? Maybe the most interesting part of the film is the homosexual Indian and the Indian who does everything backwards, and the way they're not ostracized from the tribe - I assume that is based on fact. The film is adapted from a novel, which I haven't read, but as is often the case, scenes that ring true in a book don't necessarily ring true in a film, the final scenes with Custer being an example.
Posted by Jason at 2:54 AM