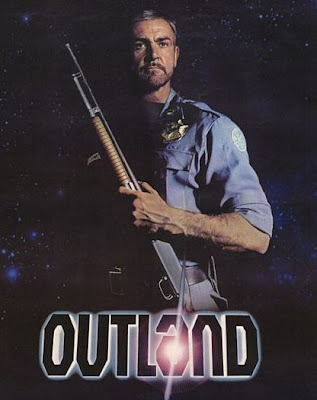 Sean Connery is a marshal for a mining colony in outer space. A new drug drives the miners crazy. Connery must face the man running the colony, only getting help from the local doctor, Frances Sternhagen. Directed by Peter Hyams.

I can imagine the director pitched this as High Noon meets Alien. Visually it's very much influenced by Alien and the story sticks pretty close to High Noon. There's even the close ups of a digital watch, counting down the time to the arrival of the bad guys. And Sean Connery and Gary Cooper have some of the same qualities - they wouldn't be caught dead Acting. There's a quite effective scene where Connery talks to his son via a video phone, and for all he knows it will be the last time he sees the son. And you gotta love that they didn't get some hot, young tomato to play the doctor, but rather someone the same age as Connery. So instead of getting, say, Farrah Fawcett Majors, they hired Sternhagen, clearly in her fifties. Worth checking out.
Posted by Jason at 3:35 AM