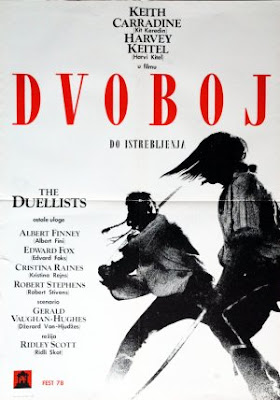 Well, this is one gorgeous looking film - almost like a series of paintings come to life, often shot at magic hour, and with a convincing recreation of the time period. The fencing looks very realistic, far from the clearly choreographed Errol Flynn type of fencing. Keitel is intense, as usual, and I've always found Carradine to be an underestimated actor. The film has a sort of impressionistic storytelling - short scenes with big gaps in between - and is less Hollywood than Scott's later films. Actually, I would say it's his best film.
Posted by Jason at 3:29 PM