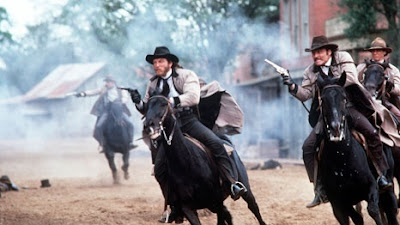 Jesse James robs banks and is shot by Robert Ford. It's the one with all the brothers: Keith, David and Robert Carradine, James and Stacy Keach, Dennis and Randy Quaid and Christopher and Nicholas Guest. Also starring Harry Carey jr, from the John Ford westerns, Mr Blue and Pamela Reed. Directed by Walter Hill.

It's a great western - one of the last good ones. It's well written. The dialogue rings true, something that often is not the case in modern westerns. There's a great score by Ry Cooder. Actually, there are real musicians in the film, playing music. It used to bother me in the old Ford and Leone films, that the fiddler or whoever was clearly an actor faking it to prerecorded music. People are being shot in Peckingpah-ish slow motion. For being a Hill film, there's a surprisingly strong female character, Pamela Reed as Belle Starr. Okay, she's a whore, but still... Dennis Quaid plays the goofy brother, not Randy. David Carradine is badass as Cole Younger. Love the scene of the Swede trying to buy his horse, in the middle of a bank robbery. The horses through the windows scene is still impressive. There's even the cowboy being shot and falling off the roof scene!
Posted by Jason at 10:15 PM